Honestly, when we got our first Boston Terrier, I didn’t know much about the differences in the breeds. After researching this topic a bit, some of the differences and similarities were pretty fascinating. You might be surprised by the health differences.

While these similar-looking breeds are both equally lovable, the differences between them are numerous. Here a quick table to make it easy

When it comes to temperament and needs, Boston Terriers and French Bulldogs are significantly different. Both breeds have a relatively low prey drive, although our Bostons might be a bit higher than average. 😉

Boston Terriers are super affectionate and tend to love people and other animals equally. Heck, ours “play” with a domestic tortoise but are not aggressive with it. (We supervise the interaction wholly)

We know firsthand that Boston Terriers enjoy playing with small furry animals, but you probably want to only do that with supervision. Bridgette and Ryder have been known to bring us small rodents and birds they caught, once in a while.

French Bulldogs, on the other hand, can be super affectionate with their owners, but not so much with cats and other animals, or even small children. They can be quite protective.

The key is to ensure French Bulldogs are very well socialized from puppy through adulthood. We know Frenchies that are just as adorable and super friendly.

Beware, Bostons have a high impulse to wander. They enjoy exploring. French Bulldogs are happy to stay in one place and don’t care as much about exploring your neighborhood on their own.

French Bulldogs are often considered great in an office environment, while Boston Terriers, not so much.

When looking at how big Boston Terriers get and how much they weigh vs French Bulldogs, there is a size difference.

There are marked differences in the available colors of both breeds. While this should not be the deciding factor for choosing a breed, knowing the possibilities may help you in finding the best pup once you made your choice between a Boston Terrier and a French Bulldog.

Boston Terriers typically hold a Tuxedo pattern of white with the following colors in combination:

What about the differences in exercise needs?

Boston Terriers have a higher energy level than the average dog breed. Bostons do need to be active for at least an hour per day. French Bulldogs have an average energy level and are considered to be semi-active.

Boston’s love to please their owners and chase things. We’ve found the good old ball throw and retrieve to be a great way to get the excess energy out of our Bostons. They also enjoy tug of war type toys.

As an aside, we experience the joy of having two Boston Terriers. Their exercise themselves often by chasing and wrestling with each other, and then falling asleep on the same dog bed.

Which is better for an apartment?

Is a Boston Terrier or a French Bulldog better for an apartment? Great question!

Bostons can be fine in an apartment provided you exercise them at least 1 hour per day. They need to get their energy out. Bostons have a lower probability of barking than the average dog breed. However, they tend to like routine without a lot of guests and changes.

French Bulldogs need less exercise and sleep a bit more than Bostons and are more sociable. However, French Bulldogs are known to have a greater possibility of having separation anxiety, so be sure you establish security with them young.

Boston Terriers and French Bulldogs are similar in their typical health concerns. While both are regularly healthy, there are some breed-specific concerns to be aware of.

French Bulldogs are more susceptible to skin allergies and infections. Boston Terriers may experience deafness as a result of ear infections more often.

Both breeds may find themselves facing any of these more common maladies:

No, Boston Terriers and French Bulldogs both can make great family pets. Just be aware of the differences in their temperaments and needs. Don’t worry about what your friends, neighbors, or family have. Remember, you’re making a commitment to your new dog.

That depends on what expensive means to you. Across the United States, reputable breeders charge upwards of $1,200 – $2,700. But don’t forget about shelters and rescues where the costs may be more in the $100 – $700 dollar range. Some of my best puppers were rescues and were the best! It never occurred to me to ask if dogs are color blind. A recent conversation sent me into research mode. Boston Terriers, like all dogs, are red-green colorblind but are not limited to seeing only in black and white. Their rod-dominant eyes only have two types of cones, dichromatic, allowing them to distinguish yellows and… Dog toys come in all shapes, sizes, quality, and cost. When your Boston Terrier is bored, or the weather does not permit exercise outdoors for long, try these indoor toys. Over years of owning Boston Terriers, we have bought and tried more toys than we can count. Their favorite toys have lasted a long time… When we first got our female Boston Terrier, Bridgette, her little puppy ears were floppy and drooping when she played.  I kept asking myself, “When do Boston Terriers’ ears perk up or stand up on their own?” Boston Terrier ears stand up at the age of 2-4 months, although it can take as long as… When you first get your Boston Terrier, you will quickly learn that it may not be able to be with you 24/7. Work, sleep, and stores that are not pet-friendly mean you’ll need to leave your dog alone at some point. When you do, a crate may be the best option. So, what is the best… If you’ve read about us, you know that we have been proud owners of a pair of Boston Terriers, Bridgette and Ryder. Recently we went through a health crisis with Bridgette that ended with euthanasia. In just four short weeks we went from exam to the rainbow bridge with her. As a tribute to her,… 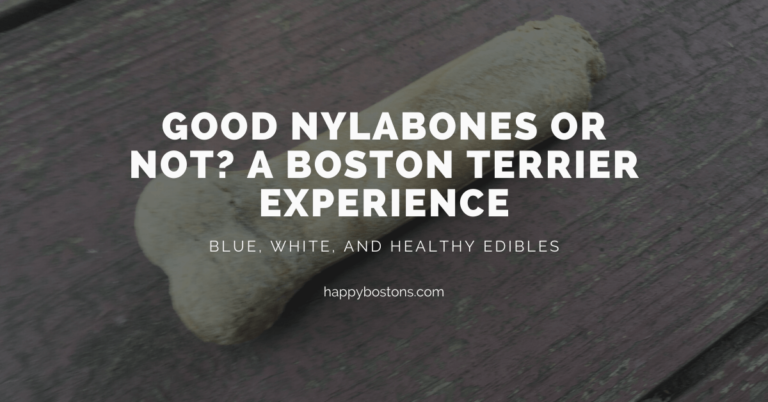